The International Network of Civil Society Organisations on Competition (INCSOC) has been floated by several civil society organisations as a coalition to promote a healthy competition culture around the world.

The idea came out of the extensive work on competition policy issues by Consumer Unity & Trust Society (CUTS), which floated the idea as a result of a path-breaking project on comparative study of competition regimes in developing countries (popularly called the 7Up Project). It revealed a crying need for building a network of stakeholders of competition policy and law especially civil society so that the competition regimes at the national level could be strengthened, and developed where absent. As businesses and their anti-competitive practices have become global in nature, the need for consumer-oriented competition advocacy at the global level cannot be understated.

Convened by CUTS International, with financial support of the UK DFID, INCSOC was formally launched on 19th February 2003 in Geneva at the Final Meeting of the 7-Up Project. At its first general body meeting, entitled “Capacity Building Needs and Tools for Civil Society Organisations,” on February 20, 2003, over 35 organizations attended and expressed a strong support for the network. Participants came from diverse countries such as Zambia, Bangladesh and Nepal from the LDC category; India, Argentina and Brazil from the developing category; and UK and USA from the developed category of nations.

A key point of agreement was the research organisations and advocacy groups need to work more closely together in enriching their competition advocacy work, which emerged as a critical learning from the 7-Up project process. This is important since effective advocacy calls for a solid research base to enable advocacy groups to convince citizens and politicians that a competition culture is good for the citizens, particularly the poor.

To guide and coordinate the activities of the network, the first Steering Committee has been formed. Allan Asher, Consumers’ Association, UK has consented to be the Chairperson of the Steering Committee. Officers were elected, working groups were established, and a variety of issues were discussed. 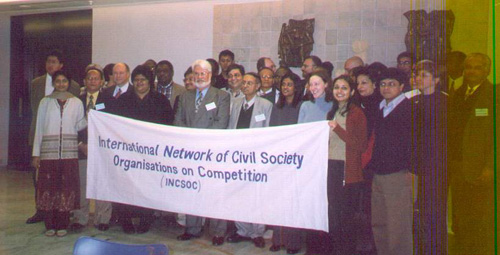